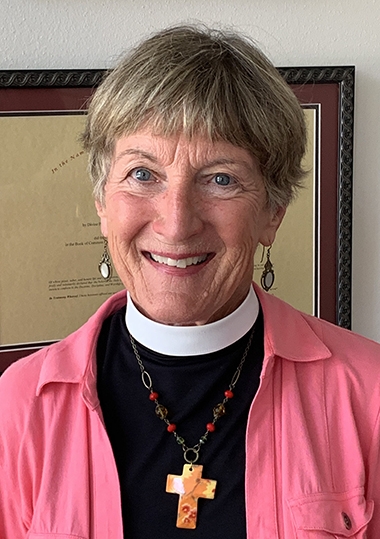 Once upon a time I loved Lent. I took on a spiritual practice, or gave up something, and Easter Sunday I was catapulted back into the glory of a risen Christ.
Then came Lent 1994. The previous October my husband Jack had been diagnosed with lung cancer. In March Jack participated in a chemo trial that accelerated his cancer so dramatically that I was frantic. “Oh, Jesus,” I prayed during this nightmare, “you will rise at Easter, but Jack is going to be dead!” And he was.
From then on, I did not “do” Lent. I had given up my husband for Lent, and that was enough to last the rest of my life. From then on I dreaded Lent.
About five years later, though, I attended a 7 am Ash Wednesday service at St. Mark’s Episcopal Church in downtown San Antonio, before going to work at a nearby high school. Bishop James Folts preached. He said Jesus had failed. He had come to bring the world to God, but he had failed to do that. The only option left was to go to Jerusalem and die. “Do you,” Bishop Folts asked us, “have the courage to go to Jerusalem with Jesus?”
No, I did not. But as I sat there and listened to the rest of the sermon, I thought, “I can go to Jerusalem to die with Jesus, but not calmly. I will squeal and cry ‘I don’t want to do this’ all the way.” When I got home, I wrote Bishop Folts a note telling him that. I can go, I wrote, but not gracefully. I can go crying and screaming, afraid all the way. He wrote back, “Fellow pilgrim, I will look for you on the road to Jerusalem.”
It was a comfort to think I could wail and cry as I walked, protesting every step of Lent, and still be heading in the right direction, and accompanied by a bishop.

It would be another twelve years before I was converted back to Lent, and it was at All Saints’ in Lent 2011. It was just a fluke that I turned up here that first Sunday of Lent. I was a first-year seminarian, and I visited all the churches in Austin that school year; but that Sunday maybe I was running late and needed a church nearby. I don’t know, I only know that everything changed that Sunday.
I was braced for Lent as I entered. But this Sunday worship began with a sung litany, and a procession that seemed to never end. It went up the center, and back; and up the right side, and back, then up the center again, and all the while everyone sang a litany. There was incense. There was the choir in the procession. The priests were in purple; the altar was covered in purple. The procession, which I later learned was called the “holy pretzel” because it went around and around, was stately.
It was the most beautiful thing I had ever seen, and I stood there with wide eyes and a peaceful heart. I was back. After seventeen years of avoiding Lent, I was able to see it as something beautiful.
I pray that this season, which can be so hard for many reasons, may be a holy time for you. If all your life seems like a sacrifice, then do something different during Lent. Add some beauty or rest or pleasure. If sacrifice helps you see the generosity of God, then take on a sacrifice. But if none of that works for you, maybe you will join me, however you can, on the road to Jerusalem, knowing that this road that leads to death also leads to Life.


Have conversasion, a doughnut, and a cup of coffee in Kinsolving Parish Hall.

Getting oriented? Take a look at our Campus Map.

"Vein of Gold" group meeting on first and third Sundays, in the Episcopal Student Center. Books are provided. We will read the section of the book we are on together, then work through the tasks. For more information, contact Donna Clift ([email protected]).

More about services at All Saints' here

Thank you! Your request has been forwarded to a member of our communications team. If you have any questions, please contact the church office at (512)476-3589.

Welcome to All Saints' Episcopal Church! All Saints' is an inclusive community that encourages the exploration of faith. Whether you are new to Austin or new to church, there is a place for you at All Saints'. Children are welcome in worship services. All of our buildings have wheelchair access. Whoever you are, wherever you are from, whatever you hold dear, you are welcome at All Saints'. To better get to know our many ministries and activities, check out the most recent issue of our newsletter.

All Saints' Episcopal Church welcomes everyone to attend our services and events. On Sundays, greeters can give you information and help you find activities. We offer a variety of services and music styles on Sundays and throughout the year. We welcome and respect every person for who they are, and feel blessed to have a congregation that is diverse in many ways. If you are looking for a welcoming church home with no pressure, give All Saints' a look. Our clergy, staff, vestry, and many ministry leaders in the congregation serve the Austin community through their work at All Saints'.

Questions about getting here and getting around?

The All Saints' Lighthouse is the Children and Youth Ministry at All Saints', hosting Youth events and retreats, Sunday School, and Children's Chapel. All Saints' Episcopal Day School educates the minds and hearts of young children by providing a developmentally appropriate curriculum that fosters a love of learning in a spiritually inclusive environment. All Saints' Parents' Day Out program provides weekday childcare for children between the ages of 2 months to 3 years old.

“As you do it unto the least of these, you do it unto me.” At All Saints', we work as a community to serve in our community. In addition to our partnerships with local organizations such as El Buen Samaritano, Meals on Wheels, and Micah 6, All Saints' hosts Loaves and Fishes and Home Cooked Fridays, and coordinates many ministry initiatives that support our neighbors in a variety of ways.

Thank you for your gifts to All Saints'! Your gifts fund our ministries and mission to share the beauty and power of God’s transforming love through worship and service in the world.

You can give online using our secure giving system. Choose "Give Now". Fill out the form, including dollar amount, fund, and email address. You can log in to have the gift post to your member giving record, or you can give as a Guest without logging in.

Thank you for making a financial pledge to All Saints'!

Your annual pledge is a commitment to give your time, talents, and money as an expression of faith and a personal response to God's generosity. When you pledge, you are making a statement of intent and support for the mission and programs of All Saints'.