Sunday 10:00 AM In Person and Live Stream, 6:30 PM Holy Communion Service of Worship with the Episcopal Student Center 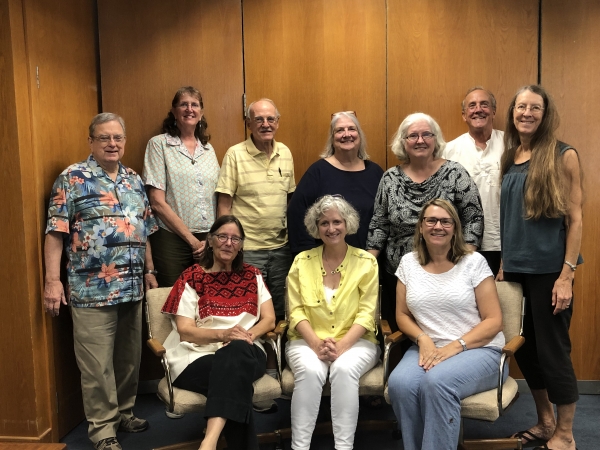 At the beginning of the new year, Central Texas Interfaith (CTI) reports to its members on the achievements of 2022.

Here are some highlights:

CTI joined sister institutions and allies from around the state to get this corporate welfare program defeated in the last legislative session, because it authorizes local school boards to give tax abatements to large companies at the expense of Texas school children. More recently CTI successfully lobbied the AISD Board to reject one corporation’s application still in the pipeline of this now discontinued tax give-away.

Huston-Tillotson University, a CTI member, partnered with CTI to host the first-ever conference of the state’s Historically Black Colleges and Universities (HCBUs). 125 representatives from seven of the nine Texas HCBUs pledged to work together to engage legislators in advancing their interests, including greater funding.

CTI leaders engaged workers, labor allies, and elected officials to convince the Austin City Council to adopt a budget that would raise the minimum wage of workers to $20 an hour, including city employees, city contracted workers, temporary workers, and those employed by corporations benefitting from city tax subsidies. CTI also worked with elected officials to maintain funding for Capital Idea, the job training program that raises workers out of poverty into middle-class positions with opportunities for career advancement.

Central Texas Interfaith was heavily involved in getting Austin to pass the largest affordable housing bond ever. CTI was instrumental in getting the City Council to raise the amount of the bond to $350 million, and in getting out the 70% positive vote in favor of the bond. In August here at All Saints’ the Core Team offered a civic academy to educate ourselves about how the housing bond works. Now that the bond has passed, CTI remains vigilant with regard to how these funds and funds from previous affordable housing bonds are being expended.

CTI has worked in the past year to get manufactured housing (“mobile homes”) covered by relief programs, like home repair and rental assistance, from which they are largely excluded. During the fall election, CTI got all the candidates who were elected to commit to making this change in eligibility requirements, so as to maintain one of the truly affordable housing options within the city limits.

With the support of the Robert Wood Johnson Foundation, CTI has begun to address the relationship of park and greenspace equity to racial justice and health equity, primarily in East and South Austin. This project is based in schools, and CTI will partner with AISD Board members, administrators and principals to develop an organizing strategy that unites schools and surrounding neighborhoods in pushing for green spaces that meet the community’s health and recreation needs.

Getting out the vote

CTI held nonpartisan accountability sessions in connection with both the primary election in March and the general election in November. Candidates for state, county, and city offices were invited to publicly declare their support of the CTI agenda of issues. Other get-out-the-vote actions included calls and text messages, as well as neighborhood walks going door-to-door. As a result, the voter turnout in CTI-targeted precincts was 74% of eligible voters, 22% higher than the general voter turnout in Travis, Williamson, and Hayes counties.

For more information on these and other topics see www.austininterfaith.org.

More about services at All Saints' here

Thank you! Your request has been forwarded to a member of our communications team. If you have any questions, please contact the church office at (512)476-3589.

All Saints' Episcopal Church welcomes everyone to attend our services and events. On Sundays, greeters can give you information and help you find activities. We offer a variety of services and music styles on Sundays and throughout the year. We welcome and respect every person for who they are, and feel blessed to have a congregation that is diverse in many ways. If you are looking for a welcoming church home with no pressure, give All Saints' a look. Our clergy, staff, vestry, and many ministry leaders in the congregation serve the Austin community through their work at All Saints'.

Questions about getting here and getting around?

The Children and Youth Ministry at All Saints' is an intergenerational, inclusive community that loves God and serves others. All Saints' Episcopal Day School educates the minds and hearts of young children by providing a developmentally appropriate curriculum that fosters a love of learning in a spiritually inclusive environment. All Saints' Parents' Day Out program provides weekday childcare for children between the ages of 2 months to 3 years old.

“As you do it unto the least of these, you do it unto me.” At All Saints', we work as a community to serve in our community. In addition to our partnerships with local organizations such as El Buen Samaritano, Meals on Wheels, and Micah 6, All Saints' hosts Loaves and Fishes and coordinates many ministry initiatives that support our neighbors in a variety of ways.

You can give online using our secure giving system. Choose "Give Now or Pay a Pledge". Fill out the form, including dollar amount, fund, and email address. You can log in to have the gift post to your member giving record, or you can give as a Guest without logging in.


Create a Financial Pledge Give Now or Pay a Pledge